Welcome to Awesome Ladies Member Spotlight interview series! In this series, we take an intimate look at some of the members of our awesome community and get to learn a little bit more about them, their story, and their craft.

What’s your name and who are you known as on Awesome Ladies?

I’m Kate, but you’ll see me on Awesome Ladies as Airendaie. Airendaie is a name I made up based on elf naming patterns in Tolkien’s works. I originally created it for a game character (WoW to be precise, but I adopted it widely as my online persona.

I’m from the UK. I grew up in the Midlands in a largish village, but we moved around a bit with my Dad’s work, spending some time in Paris and former-Eastern Germany, near Leipzig. That was in the early 1990’s so it was very much “former East Germany.” I also spent a good few years in the Southwest of France, in Toulouse. There, I trained and worked as a beauty therapist before moving back to the UK in 2010. Today I live in Edinburgh, Scotland.

I’m a full-time student; I went back to college after having my son. I had become disillusioned with the beauty work I was doing and wanted to do something more in touch with the land and the natural cycles that produce everything I enjoyed, like food and fibre.

I went to agricultural college at a very basic level, and it was possibly the best decision I’ve ever made. I’m not from a farming background at all so it was a challenge, but I’ve since learned so much and had opportunities I’d never dreamed of. I went from that prep year onto a Bachelors degree course, and I’m now in year 5 total of studying. (Honours degrees are 4 years long in Scotland.) I went into it thinking maybe I could look after some sheep one day, but now I’m set on getting into research. Animal welfare and behaviour is my area of interest, pigs in particular.

I’m carrying out a research study as part of my degree, and it’s amazing! (No pigs are harmed, it’s purely observational.) Studying full time for so long is hard. There’s plenty of times I’ve thought, “what am I doing?” and we’ve struggled with money. But it’s worth it. I’m waiting for PhD applications to open in December and throwing my hat in the ring!

I’m also a mum. My wee man is 5 3/4, and he’s a shining light for me (most of the time!). His name is Florian, and he has long blonde hair. If you’ve seen any of my layouts, I’m sure you’ve seen him. He’s my favourite subject to scrap! He’s old enough now to correct people who misgender him, which happens all the time, and really highlighted to me what an issue that can be for people of different or non-binary genders.

I’m also an intersectional feminist! Nuff said there, coz I know I’m among friends! 🙂

How did you get into paper crafts?

I was living in a small town a couple of years ago that had a little arts and crafts shop. My partner’s birthday was coming up, and I suddenly thought, “I want to make him a super unique and special card!” So, I went in and bought some supplies. I made a couple of other cards, but on reflection, the stuff I bought really didn’t suit my taste and didn’t inspire me, so it just kind of stayed in a box.

Then, around a year ago, I heard about the hype around December Daily and thought I’d give that a go. I’d seen Project Life in the craft shop and found they had an app. At first, I was just using it to make collages for printing to go in my DD! I was attracted to the idea of telling stories for myself and for posterity, for my son to have something to look back on and remember his childhood, or to remember me by one day.

How do you think your craft style has changed from when you started to now?

I suppose it’s just gone from being quite basic to the style I’m developing now. Although, when I started I tried to apply “design rules” that I’d learned through photography, I didn’t have much imagination, I think. And I was paper scrapping then and didn’t really love the products and things I could access locally.

I’ve gradually become more attracted to the minimalist style, although you’ll still see some more traditional paper layering and such from me from time to time. That change has definitely been fueled by discovering digital scrapbooking earlier this year (around the time of WITL), and all the amazing resources I can access to make something I really love and reflects me much more.

Where do you get your inspiration from? Who are your favourite crafters?

I like looking at art and photography. That really inspires me. My partner went to art school in his youth and has shown and taught me a lot about art history and techniques. I was never into art before that, so it’s really opened my eyes to all sorts of sources of inspiration. There are a few crafters I like to see on Instagram, including the big names like Ali Edwards and Kristin.

What are you currently working on?

Generally, I’m enjoying working on single digital layouts. It’s a real creative outlet for me that doesn’t make a lot of mess. (There’s already a lot of that in this house!) It takes a lot less time to do just 1 layout than to start on a physical project.

Can you share more about one of your major craft projects you are working on this year?

I have so many projects on the go, I should probably try and finish one! I’ve got a mini album in progress of my study tour to Germany in May, a traveler’s notebook for our holiday to Cornwall in July that I’ve only done 2 and a half spreads in. I don’t think I’ve quite finished my #30lists either. I’m a serial beginner!

Do you have any crafty goals for yourself for the near future?

Yes! I’ve recently received some gorgeous fabric that I ordered for making some blouses. I’ve never been a big sewer, but I bought a machine a few years ago to make outfits for going to a Star Trek convention and thought its about time I put it to use. I went shopping for a blouse last month to wear to some meetings, and nothing fit properly! *sad face* So, I figured I could make something that fits much better at home without paying stupid money. I have a couple of cute patterns I want to try, but I know it’ll be a challenge.

Probably the tag book I made for my sister for her birthday. It was full of pictures from our recent sisters weekend in Northumberland. I LOVE how it turned out!

What drew you to Awesome Ladies? What’s your favourite part so far?

The tag line ‘feminist scrapbooking’ was the first thing that made me look! I love the Discord for private chatting. (I don’t much like Facebook, which seems to be the standard for such groups these days.) We also just had Harvest Fest, and it was amazing! That was the first time I’ve participated in such a thing, and I found it really motivational and so friendly and supportive. Can’t wait for our next crop!

Favourite social media to use?

If you could travel anywhere in the world where would you go?

Probably Japan. When I was a baby, my Dad worked there, and my mum moved out with me for a year. So, there are these cool baby pictures of me in Japan, but I have no recollection! I’ve been pretty obsessed with Japanese culture, probably since my teenage years, when the Internet allowed me to discover manga, anime, and J-pop!

TV – Star Trek Voyager (Loooove Captain Janeway, and I met Kate Mulgrew at the aforementioned convention <3); Doctor Who – I like a few different Doctors, but my fave companion has to be Donna. Loving the new lady Doctor and want to copy her outfit! She’s awesome.

Movies – I’m such a sci-fi geek, I love anything that’s from the “pure space” genre to space horror to post-apocalyptic stuff. Some favourites include Event Horizon, 2001: A Space Odessey, Alien (I love all of them, but 1 has something special; also Resurrection because Jean-Pierre Jeunet…); Intersteller, The Zero Theorum, and many more. I also love watching kids films with my boys. We went to see Teen Titans Go a couple of weeks ago, and I loooved it! The 1980’s soundtrack! The rainbows! Slaaaaaade! Other genres: Rocky Horror Picture Show, Lost In Translation, Deadpool.

Podcast – Crafty Ass Female! I used to listen to Scrap Gals before it became a subscription and found Tiffany and Tracie to be good fun.

Music – Enya has always been a firm favourite. My playlist hasn’t changed for a bit and currently includes a mix of Christine and the Queens, Skepta, M.I.A., Infected Mushroom (Florian’s favourite Israeli trance duo!?!). Oh wait, anything 1980’s cheese as well. I love 1980’s colours, fashion, the sound of early synths, Jean-Michel Jarre, big power ballads, Kate Bush, and singing songs by other people in a Kate Bush style voice.

Watching – Doctor Who, just not last weekend’s episode because I’m a terrible arachnophobe! My partner watched the first bit for me to see what it was like and just said: “I’m sorry, I don’t think you can watch this.”
Reading – Why I’m No Longer Talking To White People About Race by Reni Eddo-Lodge, slowly. Research papers, as quickly as possible!
Listening – The audiobook of Sabriel by Garth Nix, read by Tim Curry
Making – digi layouts, putting together a happy mail for an Instagram art friend in the US, an essay on “carbon sequestration and greenhouse gas emissions policy, as it relates to forestry in Scotland.” (NOT my favourite subject.)
Feeling – A bit nervous about going to be a guest on a podcast with NUS Scotland later today.
Planning – Advent calendars and starting to think about December Daily!
Loving– That it’s suddenly got colder. We had our first frost yesterday morning. Also, that the clocks changed, and it’s getting dark early in the evening. (I know that’s weird, lol). Bring on winter!

Thank you so much Kate for sharing your awesome lady life! 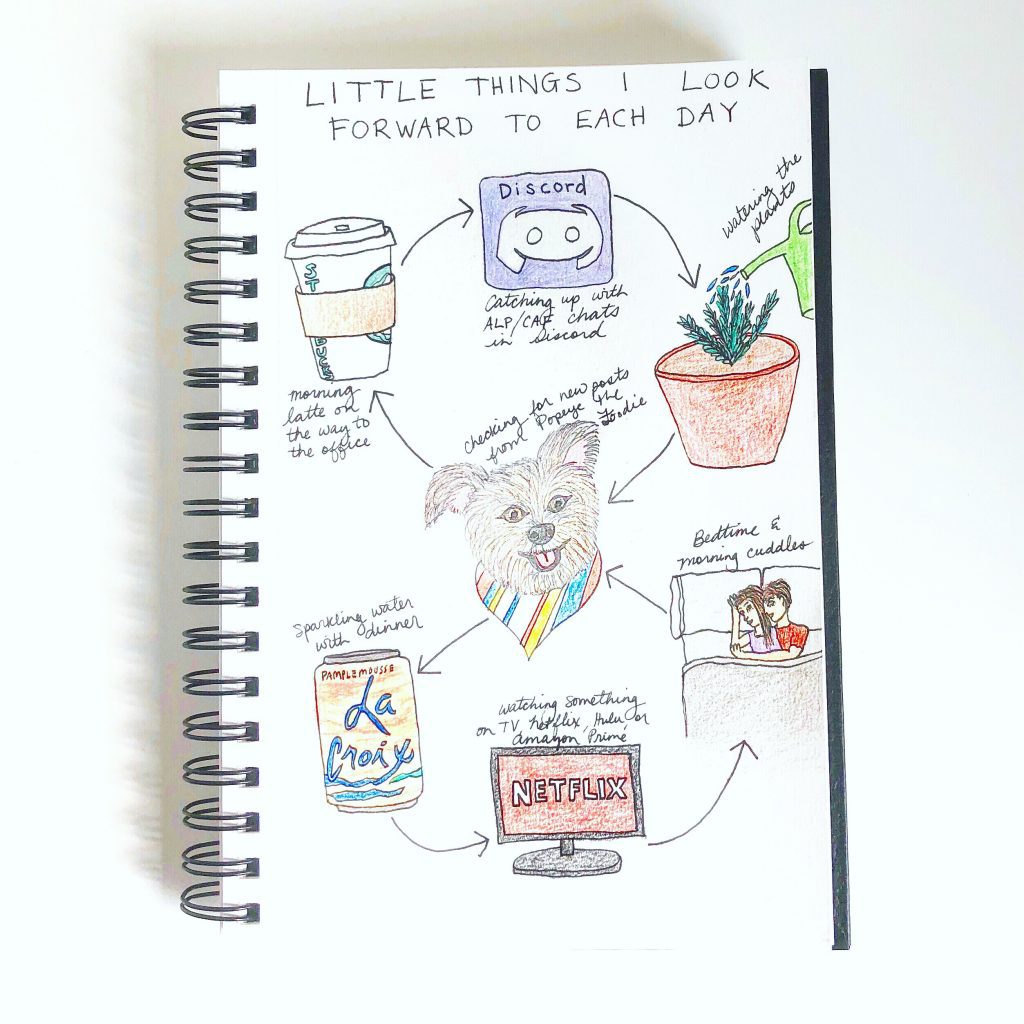 Welcome to our new Awesome Ladies Member Spotlight, more in-depth with more questions, so we can get to know you wonderful ladies a little better.… 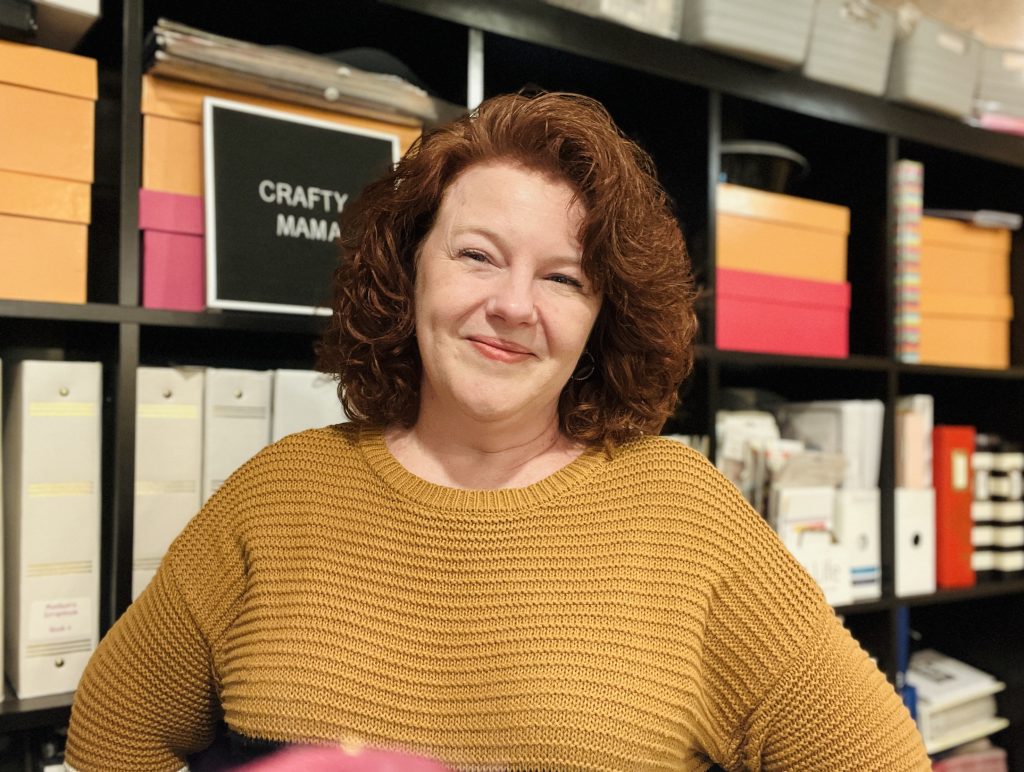 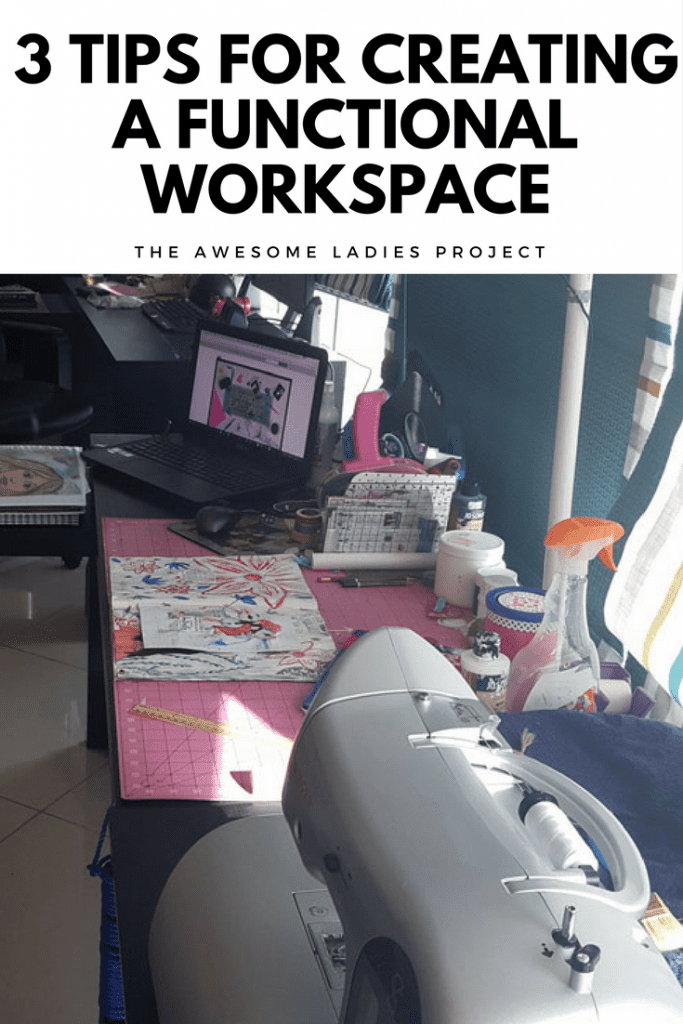 There was a time in which someone asked me whether or not I wanted a beautiful workspace. While the answer was and still is yes,…

This site uses Akismet to reduce spam. Learn how your comment data is processed.

Please confirm you want to block this member.

You will no longer be able to:

Please note: This action will also remove this member from your connections and send a report to the site admin. Please allow a few minutes for this process to complete.

You have already reported this
Clear Clear All